Houses houses everywhere, and no tradies to build them

A raft of new social and affordable housing projects around Wellington could be stymied by a shortage of tradies to build them.

National projections estimate up to 60,000 new construction workers will be required over the next five years to keep up with demand, and the race is on to fill the labour gap before a number of big projects in the Wellington region push up building prices.

But experts in the public and private housing sectors say the burgeoning shortage tradies could push up costs, and delay completion dates.

Lower Hutt real estate agent John Ross said: “At the moment, for new builds, you are waiting at least 12 months and even 18 months.”

Rudy Van Baarle, who is building nine new homes in Treadwell St, Naenae, said the skills shortage was a major problem. “There is a real shortage of people throughout the whole [building] industry.”

Wellington City Council Housing Task Force chairman Paul Eagle said increasing the number of qualified builders would be essential if the capital were to achieve its targets of building an extra 20,000 houses by 2040.

Labour shortages had not affected progress on the new housing units yet, but this was because workers had been booked up to 24 months ahead.

We’ve been lucky, but this won’t always been the case,” he said.

His main fear was that Wellingtonians would start paying a premium to secure builders, which would push prices up. “That could become a serious issue around affordability.”

Building and Construction Industry Training Organisation (BCITO) chief executive Warwick Quinn said forecasts estimated 50-60,000 new construction workers would be required over the next five years, and about half would need to be trade-qualified.

“We are producing about 2500 newly qualified graduates a year … about a half to two-thirds of [the] number [required].”

Skills shortages were predicted across the spectrum of trades, including carpentry, roofing, bricklaying and decorating.

Roughly 11,000 apprentices were currently in training with the BCITO, a record high. Quinn said a trial was about to be launched that would allow those with skills but no formal qualification to be assessed and, provided they were up to scratch, used in the workforce.

The new graduates and apprentices are likely to be in high demand in Lower Hutt, where the housing projects come on top of Hutt City Council’s $24.9 million events centre and town hall, and a $12m hotel on High St.

Other council projects include the $12m Fraser Park Sportsville, a community hub in Stokes Valley, and a regional bowling centre in Naenae. There are also a number of apartment block developments under way in Petone, and in Wainuiomata the Parkway Rise includes 59 new homes.

After the Canterbury earthquakes, Housing NZ built 700 homes and repaired more 5000 within a tight deadline, despite the shortage of tradies, he said.

The first 30 homes in Lower Hutt are to be completed next year, with some expected to be finished by early 2018.

Mike Friday, of Friday Homes, whose Hutt Valley projects include Parkway Rise in Wainuiomata, said he had numerous adverts on Trade Me for qualified tradespeople and was always looking for apprentices.

But he agreed getting projects finished on time was all about good organisation, and believed Housing NZ should be able to achieve its target in Lower Hutt.

* 30 new social houses on four sites in Lower Hutt, with work commencing immediately, at a cost of $9.5m

* Master planning for up to 300 further homes across four sites in Epuni, Naenae and Waiwhetu

* Refurbishing 383 existing homes to make them warm and dry, and bring them up to standard, at a cost of $67.3m 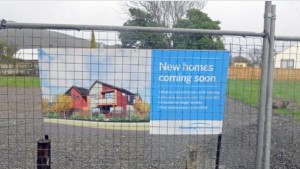