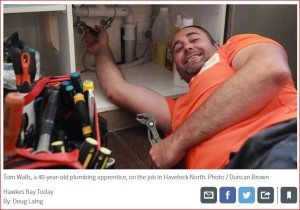 The hardest part about becoming a plumber was going back to school, says Tom Walls, a 40-year-old apprentice with Havelock North firm The Plumber.

But there’s more to come, with two of the four years to go, albeit with support of a Plumbing World Scholarship for Hawke’s Bay he received last week at the annual New Zealand Plumbing Awards in Hamilton.

Walls was one of six throughout the country who are training with the help of the scholarship as Master Plumbers strives to maintain the skills of plumbing, drainlaying and gasfitting through industry group Masterlink.

But he was not the only one with a few more years than the typical apprentice — more often a teenager straight out of school on the road to becoming a tradie.

A qualified accountant turned plumbing apprentice was also among recipients of the scholarship.

The scholarships are for those in the Masterlink programme, a mentored apprenticeship group scheme that employs apprentices and places them with host plumbing, gasfitting and/or drainlaying firms. 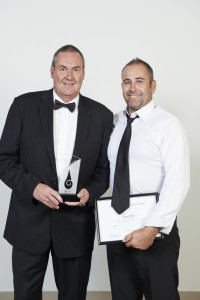 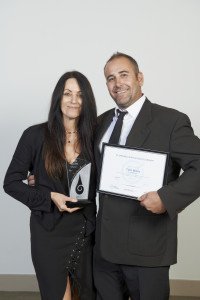 To be considered for the scholarships, candidates must have demonstrated diligence in their studies and personal growth over the past year, and be seen as true assets to the businesses providing them with the on-the-job training towards their plumbing, drainlaying and gasfitting qualifications.

The Plumber bosses, Jamie and Alice Blakely, say the quality of their protege’s workmanship and his attention to detail get stronger every day.

“Tom is a team player and a great collaborator equally out on work sites and in team meetings,” Blakely said in the nomination.

He was already being given more autonomy, recognising problem-solving skills and ability to improvise, seen as key parts of the trade.

Blakely said it came to the fore recently when Walls helped a customer with an overflowing septic tank, two days before a family wedding was due to take place on the property.

“After diagnosing the problem, Tom arranged for the tank to be emptied and the drains jet-cleaned that morning,” Blakely said. “He gets excellent feedback from customers and colleagues.”

Walls said, having fitted suspended ceilings in Auckland for five years, worked in spa pool installation in his native Hawke’s Bay and done the OE thing of working in bars and other jobs abroad, he wanted a change which would sort his future, and he “didn’t want to go on the dole”.

He said he had thought about a plumbing career in the past, but had done nothing about it, until he spotted an advertisement while home in Hawke’s Bay on holiday.

“It’s not all dirty work, there’s a good variety, and the qualifications you can take worldwide,” he said.