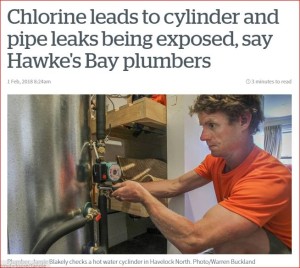 Plumbers across Hawke’s Bay are continuing to field increased callouts from people whose hot water cylinders and water pipes have sprung leaks since the introduction of chlorine to water supplies in Hastings, and more recently Napier…..

One plumber spoken to said they replaced about 170 hot water cylinders in Hastings and Havelock North last year, and had also dealt with pipes that had started leaking under people’s houses.

Jamie Blakely, owner of The Plumber in Havelock North, said leaks in hot water cylinders and water pipes had become more prevalent since the introduction of chlorine, but he stressed it was not the chlorine causing the problems.

“Ninety-nine per cent of the cases we are coming across are existing leaks that over time have become plugged up with mineral and lime scale – the chlorine is just cleaning and exposing those leaks.

“We get a lot of people saying it was fine six months ago and now there’s a problem, but when we ask them if they have been regularly checking them the answer will be no.”

He said there had also been a significant increase in leaks in copper pipes set in the slab of houses, particularly those built between the 1970s and 1990s, and, while chlorine was contributing, again it was not the cause.

He noted that people who were trying to claim insurance for the replacement costs were largely unsuccessful because it was a maintenance issue rather than something created by chlorine.

At East Coast Plumbing and Gas Ltd in Hastings, Emma Davis said the leaks were occuring because the chlorine was “cleaning” the cylinders and exposing existing pinholes.

“When you have a 50-year-old cylinder it’s being held together with dirt and gunk – the chlorine cleans that out and shows up all the holes – some of these cylinders are so old the bottoms are falling out, and no-one looks at them or maintains them.”

She said there was a spate of activity in the Hastings area last year, that all came in at the same time, but the problem was ongoing.

“Unfortunately people don’t notice that the carpet might be getting a bit wet or there’s a slight drip.”

She advised people to check the date of their cylinder and if it was more than 10 years old to keep an eye out for any moisture around it.

Rob Findlay serviced both Hastings and Napier and said he had seen a marked increase in hot water cylinders failing, and some of the “cheap Chinese” copper pipes had caused issues in both areas.

Since the chlorine was introduced in Napier, however, he said of even more concern to people was the smell and skin irritations, as well as issues with dirty water.