Brisbane’s plane-sized fatbergs, and how we’re making them worse 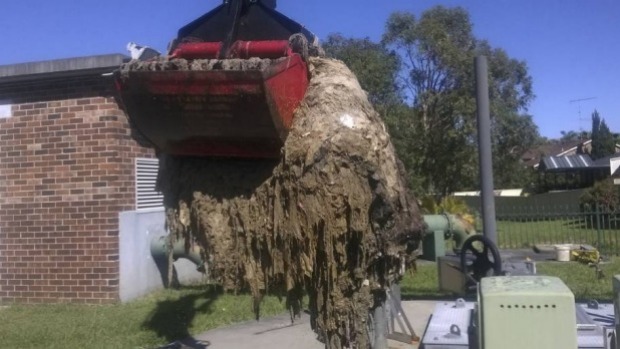 Guilty of tipping used cooking oil or fats down the kitchen sink?

You could be building your very own fatberg.

In Australia, Queensland Urban Utilities crews look after more than 9000 kilometres of sewer pipes across Brisbane, Ipswich, Lockyer Valley, Scenic Rim and Somerset, and have seen their fair share of disgusting, but by far the worst is the fatberg.

A combination of cooking fat and wet wipes, these clumps are the stuff of nightmares and can cause severe blockages in sewer pipes.

Queensland Urban Utilities spokesperson Michelle Cull said the term fatberg originated from London where they can take on monstrous proportions.

“They have giant fatbergs, one was the size of a bus, one the length of Boeing 747 plane,” she said.

“Our fatbergs aren’t as big as that, but we do have them.

“Fat can line the sides if the pipe, they can stretch for metres along the inside of the pipe wall.”

Cull said hot cooking fat that is poured down the kitchen sink cools as it travels through the sewerage network and solidifies with other “nasties” found in the sewer, like wet wipes, and can cause major headaches for those in charge of pipe maintenance.

It costs about A$1.5 million (NZ$1.7m) to clear the 4000 blockages in the sewer network each year and Cull said Christmas time was notorious for building fatbergs.

“It’s not just fat from the Christmas roast that can cause issues,” she said.

“About 50 per cent of people tip leftover sauces and dips down the plughole, while almost 15 per cent wash food scraps down the sink.”

The statistics, taken from a 1000-person 2015 survey, also found one in four people were guilty of pouring cooking fats down the kitchen sink, which can be easily avoided, Ms Cull said.

“Wipe the grease from pans with a paper towel or pour cooking oils into a container and throw it in the bin,” Cull said.

“It’s also a good idea to scrape your Christmas leftovers into the rubbish bin instead of the sink.”

Other items to avoid putting down the sink: