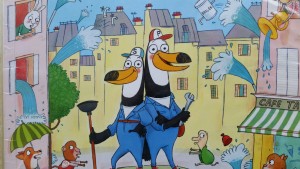 When your loos got the blues and the showers run dry,

When the sinks on the blink and the soaps in your eye.

When you’re wearing the cushions to cover your ears,

To drown out the tap that’s been dripping for years.

In the Bay everyone knows who to call…..

The fast-plumbing Plumbers Jamie and Tom!

For a splish or a splash they’ll be there in a flash,

For a drip or a drop they will come on the dash. 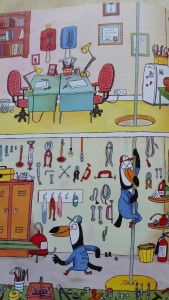 Jamie and Tom have plungers and spanners,

They have the know-how and impeccable manners!

For a job you just cant do, just call those who can,

The people that can do: your plumbing man!

Who finds Giraffe that extra meter?

Who will tell Mole that his tap wasn’t on?

And who will discover where Pigs boot has gone? 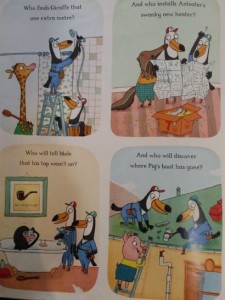 And when the jobs done and they’re certain they’ve fixed it,

Who will have tea with a chocolate biscuit?

The answer is easy – its Jamie and Tom,

For no job is too big, and no pipe is too small.

One afternoon at the plumbers’ HQ,

The emergency phone rang (the red, not the blue).

On the line was the mayor, quite in a pickle,

The spout from his fountain reduced to a trickle. 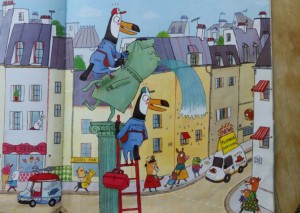 The birds quickly arrived with ladder and tools,

And a well-thumbed edition of Good Plumbing Rules.

But as they were working they spied a van driving,

The van pulled to a stop and a crowd gathered round,

And out jumped a hat-wearing, tool-totting hound.

He had gadgets that whirred, and things that went beep,

And he guaranteed all of his prices were cheap.

“I’m top of the pipes and plumbing’s my game,

Call me – whenever! Flash Rovers my name”.

We’ve been honing our plumbing craft year after year.

We’re honest and good and we do what we say.

This dog may be cheaper, but better? No way!”

But soon the birds’ work had completely dried up,

All of their customers pinched by that pup!

Come a spurt or a spout and that dog was about,

And when something burst, he was always there first. 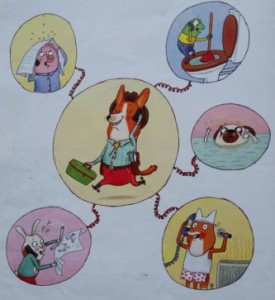 Seems folks are just smitten by anything new.

The birds were left jobless, with nothing to do.

But what Jamie didn’t know and and Tom didn’t guess,

Was that cheeky mutt was just making a mess! 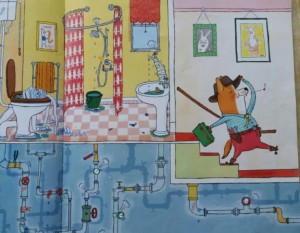 He’d seal up a crack using any old thing,

He tie boilers together with big balls of string!

He patched and he botched, he slap-dashed and bungled,

He short-cutted, covered and muddled and fumbled.

No wonder his work was much cheaper and faster!

It was easy to see this would end in disaster…..

And sure enough, Croc’s pipe sprang a leak,

The pipe that the dog had fixed only last week! 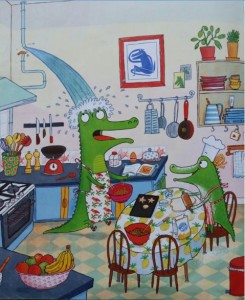 And one moment later, Pigs shower had burst,

But not before Lizards new boiler broke first.

And out of frogs window two taps quickly flew,

And lets draw a veil over poor Rabbits loo….

All over the Bay it seemed, one by one,

That Flash Rovers jobs were all coming undone! 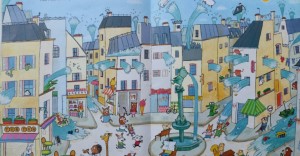 As a plumber his work is disastrously flawed.

His bite was apparently worse than his bark,

We must get some help or start building an ark!”

“The Bay is drowning, we’re right in a jam,

And no-one can save us but Jamie and Tom!”

Well the two birds were touched by the pleas of the town,

And this was their home – they would not let it drown.

“And really” said Jamie, “that dog is a menace,

For everyone knows this is The Bay, not Venice!”

So they plugged up the leaks and they unclogged the drains,

They cleaned out the pipes: kitchen, bathroom and mains.

They plumbed with aplomb and not a second too late,

And rescued the town from a watery fate.

They said to Flash Rover, “You need a new plan,

You CAN’T do the job that the two of us can!

And now that we’ve cleaned up the mess, you’ll agree,

That the Bay just ain’t big enough for us three!”

When your loos got the blues and the showers run dry,

When the sinks on the blink and the soaps in your eye.

When the plumbing is driving you round the U-bend,

Who are the team on who to depend?